One of the most hilarious things ever. And here are a few pictures, jokes, and quotes from the series.

This one picture summarizes these characters so well.

I love the scene where Bandit Keith is telling his three henchmen to get lost and get off Duel Kingdom Island. He does so by saying to get out of America. And when they respond with the logical ‘this isn’t America’, he replies with “All countries belong to America!”. “…So how are we supposed to leave then?” “I don’t know!”

Joey’s trying reaaally hard to make it his thing.

Main character- he can get away with anything. When he cheats, he doesn’t.

One does not simply forget the trauma of their father pouring boiling tea over one’s mother and asking “Why so British?!!” repeatedly.

Episode One- It lacked a lotta logic.

And yet Bakura and Marak are constantly shipped together both in fan fictions and in this series. They are both characters portrayed to be gay-

As you can clearly see, Bakura isn’t very fond with admitting to it. He likes his British excuse.

I’m sure this is what it’s going to be like when I finally go back to watching the actual Yu-Gi-Oh! soon enough.

My sentiments exactly. And my face exactly too. Never would I have thought I’d have the same expression as the all handsome Duke Devlin =| =/ =P

Aaaand now I’m off to watch some more of the series :3

Go watch it 😀 Well, before I watched it on that other site I mentioned before, but it didn’t have any episodes after 35. I couldn’t find any, at least. So I started watching it on dailymotion.com. They’re available there, albeit with French Subs for some reason =P

But there nonetheless and funnyyy~

So I have a break in my CIEs. A loooong break. A twenty day long break, to be exact. And after which, I have my Physics practical. A day break, and then my Chemistry one. After which I have something around six days, then my Chemistry MCQs, another day gap, then lastly and finally, my Physics MCQs.

I found something hilarious yesterday. As you know, I’ve been wathing Yu-Gi-Oh! for the first time. And I remembered earlier in the school year, Zara and I were discussing it. She mentioned watching an abridged of it. And I recalled this last night, at around one am, after I forced Que to watch three episodes of No Game No Life. (He fell in love with it, evidently.) That’s how  I found the Yugioh Abridged series by LittleKurioboh. And it’s damn hilaaaarious~!

Must watch for anyone that’s scene Yu-Gi-Oh!

Although it’s really tough to find all the videos on youtube, since apparently LittleKuriboh got banned or something, and all the playlists of the series were deleted/the videos were deleted/removed. So I googled it, and found a site with the complete videos on them! There’s this one too, but the order of the vids all jumbled up, as far as I can tell.

If you ever wanted to know why Yugi’s such a hobbit, why Tristen’s in this show in the first place, and what is up with Joey’s accent, you should totally watch this. It also explains why there are but only two female characters in the entire show, plus, why Mai can never beat Joey. Who is Taya gonna end up falling for? Why is Bokura a British prick? And much muuuch more! 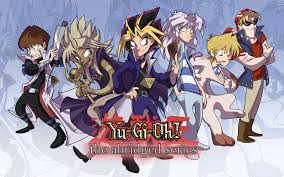 Now I guess I’ll recycle my sexy transformation sequence!
(Something along those lines) -Yugi, Yugioh Abridged.