THE SECOND SEASON OF SHOKUGEKI NO SOUMA IS OUUUUT~!!
(Ni no Sara means something along the lines of “the second plate”.)
(Well, it came out a day and a half ago, but I tried to wait for Alya to watch it with.) 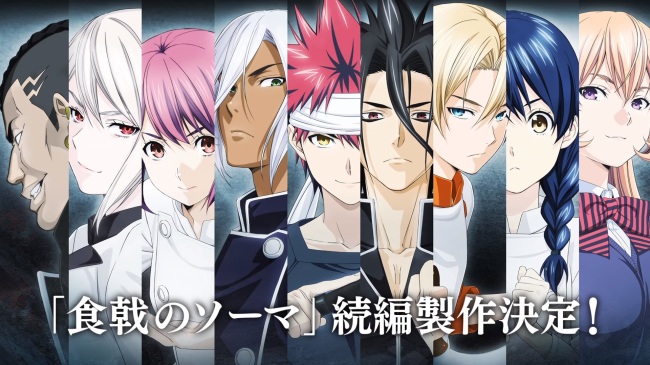 So Alya and I started Shokugeki no Souma together when it first came out, but we never found a mutual time to finish the first season. So we had that last episode left and I tried to get her to watch it with me now that the second season started. But she kinda made me wait a day and hasn’t replied since, so I just went ahead and finished it.

ONWARDS TO THE SEASON 2

AND OH MY GOSH the hype the drama and the shokugekis have just been crazyyyy in this first episode and the last one of season one!! I have MISSED this show and I can’t WAIT for more! I’ve been waiting for this for so long and after Haikyuu, I have desperately been in need of an anime that gets me that hyped up and excited. Well, here it is ❤

On the little chatango box to the right of animeultima.tv (where I watch all  my anime. I’d seriously recommend it; it’s awesome!), I saw people discussing Sword Art Online. And it’s second season coming out.

Now, I had only started watching it a bit  a few months back, and had only seen the first three episodes. But I had heard Alya fangirl over it all the time. And the way she talked about it, I thought the show already had two seasons, both of only 12 episodes each. So when I saw this discussion on the new Season II releasing in July ’14, I thought the admin on the site had just been too lazy to upload season II before (I’m sorryyy! >.< I’ll never doubt your hard work, and perseverance again!) and were going to upload that in July.

Turns out I was huuugely mistaken, and there’s only one 24 episode season I of SAO, and they are releasing a sequel season soon. But it’s story line is terrible so far for sooo many reasons!

First, I thought that Kirito wasn’t in it at all! And that these two chicks were instead;

How cool do they look?- But, no! No Kirito?! Then how’s it SAO?! It’s an unnecessary weird spin off thing, like Soul Eater Not! (Like it, but not as good as the original series.)

And then Alya does a bit more googling on the story line, while I google more on it’s release.

It turns out Kirito IS in the story. But Alya misinformed me and said he’s in it as a SUPPORTING CHARACTER to these two chicks.

Bring out the army of fangirls. This isn’t going to be pretty.

But theeen, we find the actual story- Kirito’s avatar is simply that of a girl’s! He’s the maroon haired chick here! This chick;

*Avatar may or may not be this blue. I don’t know.* 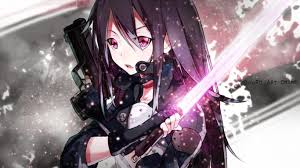 *Or this maroon. They need to decide a color scheme, sheesh.*

And him having the avatar of a girl’s is terriiible! Because he’s obviously going to get stuck in a game again, and for the vast majority of the show, we shall see him as a giiirl! Ewww! As someone who think’s Kirito’s adorable, cool, and cute, I’d hate to watch him as a girl all of a sudden. That just doesn’t work for me.

What were the writers thinking? They’re going to end up loosing loads of fans! And the fans they think they’ll gain with She-Kirito’s boobs won’t be that big if no one even understands the confusing mess they’ve made out of the story. I mean, it’s only normal to assume the lead will be the same- and same gender >.> =/- in a sequel series. So not many people will skip SAO and just watch SAO II cuz of the girl leads.

Pfft, and the best thing is this stereo type the Japanese are playing on the Americans. Usually, in anime and manga it’s a rule that all American foreigners muuust be blue eyed and blonde? Well, here they’re adding to that (I hope!) and adding this impression from the internet. The American video game Kirito’s playing now is all about- you guessed it- GUNS!

Gun Gale Online (GGO) (Gale? Reallyyy?? Like, a gust of guns? Like a wind bringing guns with it? Or super guns that blow air too? What a name…) is a game all about guns. But Kirito’s got too much swag for that shiz and obviously went “I’m Japanese. In an Anime. I do what I WANT! Your laws don’t apply to me! And even if you do try to get me to adhere to the rules of this game, I shall use my Japaneseness to simply recode the program of your game to allow me to play with epic swords!” on them and did just that. He has a sword (light saber thing…?)(as well as a gun?) as his weapon.

[I don’t mean to sound mean toward these nationalities. I’m simply joking around. It’s all fun and games. Please don’t take any of this seriously. If anyone out there is offended, know that that was not my intention, and you shouldn’t be. I’m not serious. But in case you still are, I apologize for bring about such a mood on you.]