[Spoilers will be present in this post!]
You have been warned.

First thing to gush about- Ze Crimson Prince! (Ep VII- The Appearance of the Red Head)
From the most recent installment in Mahouka Koukou no Rettousei~

So this guy FINALLY goddamn had a cameo after SEVEN episodes of waiting for his badass arrival! All these red heads from this anime season are pretty awesome. Yeah, I’m talking to you, Sora ❤

But this is about THIS prince <333

I saw him in the theme song and instantly knew this guy was going to be my favorite character. I have hence been waiting desperately for his appearance in the show!

And after every disappointment so far, Alya and I plotted gruesome murders of the creators of this show because 1. Red Head wasn’t in the show yet, and 2. Tatsuya hasn’t shown us his epic fighting skills, not all of them, and not a single fight has occured that has pushed him to his limits.

But now that the Crimson Prince is here…that may change very, veryyy soon.

Especially since they just showed that this guy is from another magical high school, and a very…morbid? Realistic? Deathly? Dark? one at that.

I mean- Red Uniform. The first scene he’s shown in, he’s drenched in a pool of blood! That’s why his uniform is red, I tell ya =/

But, gooosh, they showed him next, in the shower- but course they didn’t show all of that, they just showed his wet feet, and then his wet head. But he was shown wrapped up in just a towel after that. Which was when he did a HAIR FLIP THINGIE. Damn.

He swooshed his hair back dramatically, discussing their rivals.

Rivals obviously being Tatsuya and Miyuki!

Ah, right, I said ‘their’. There was this little vampire Seedot present too. This shortay. 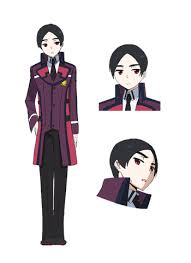 And now, here’s a seedot for comparison’s sake.

Anyhoo, I think some background is needed.

Mr. Vampire Seedot and Cool Evil Villain were discussing the news of how there was a bomb attack at Mahouka Koukou (Tatsuya’s magic school.) and how it’s rumored to have been caused by terrorists (that was not the case at all, but just a cover up. It’s amazing how terrorists are used as a cover up story in a fictional story xD ). And that’s when Red Head asked if their ‘rivals’ were safe. Which they were. And that’s when the end credit thing scene ended with the appearance of the anime’s logo, exceeept it wasn’t the actual logo! It was in the same design, color, font, and everything, but it said something different. It said “Nine School Tournament.” Which implies that there may just be a contest between nine magic high schools and two confirmed schools participating would be Tatsuya’s and this Red Head’s! That would also make us audience fantasize about the fight scene between Tatsuya and Red Head in the theme song to occur in that next contest- when they both probably make it to some finals of a magic duel contest. Or something of the sort.

They both have guns too ❤

Now one last picture before I move on…

Now, other stuff that must be addressed in this episode!

1. The appearance of the Evil Yotsuba Aunt;

So her face is revealed to us after seeing just a quick glance at her physique when Tatsuya and Miyuki were discussing her some three episodes back. She looks so MUCH like Miyuki! Her hair does, as does her facial features- but those EYES. So evil, and neon PURPLE. Mesmerizing, and yet the kind of eyes that send shivers down your spine. The kind you know it’ll be a very bad move to get on the wrong side of, and to anger. Those kind of eyes.

Pluus she mentioned how Tatsuya’s Miyuki’s guardian. And on hearing that a few theories and ideas popped into my head.

One, Tatsuya’s actually a few years older than Miyuki, a twenty year old, and was adopted to protect her and serve as her body guard. I don’t think this is the case, but something else it, since the age difference isn’t something I expect from this anime, nor something I can see them doing.

Yet this is what I think happened. Two, Tatsuya’s as old as he’s portrayed to be, yet joins the military for whatever family reasons at a very young age. After proving his aptitude with his fighting magic, and sheer intelligence, he ascends the ranks at an alarming speed. It’s then when the Yotsuba family realize they need a body guard for Miyuki, possibly after a breech in security or an attack attempt/assassination attempt on her. Either way, they are somehow directed towards hiring one from the army, and after finding out about Tatsuya’s age and his skill, they adopt him.

They then, three, either decide that it’d be safest for Miyuki to go into hiding- no, wait. I think Miyuki herself decides this with Tatsuya after falling for him, and they run away, trying to hide their strong affiliations with this family, and to try having normal lives.

Or four, Tatsuya convinces the family that it’d be in the best intrest of the family if they let him take care of Miyuki by himself, away from the family, and under the pretense that she isn’t an ojou-sama.

Either way, they end up together, living a life their own, until now, where the Yotsuba family is thinking of intervening…

AND- that does however confirm one thing to me. The two really aren’t related. Or at least, that’s my theory.

Near the end, he put his hand on Miyuki’s lower back. And he did so suuuper awkwardly to me. I thought he was going to put his arm around her waist, but he just didn’t. Too romantic? Perhaps…But then in the next scene, he  was directing her to walk away with him, and so I though he should’ve done so by putting his  hand on her upper back, on her shoulder blade region. Very normal. Usually a very authoritative and protective thing to do- not romantic. But he didn’t. Even attempting to grab her ass would’ve been more normal! (And he would’ve swooned.) But he just rested his entire hand on her lower back instead. What a Casanova.

They stole my AAA- The Awesome Asian Alliance- and made a carbon copy of it as the “Great Asian Alliance”. Pfft, the GAA. Grr. It’s MY super hero league, not yours! Damn them.

Not for stealing my League’s name. Nuh-uh. But for making us wait so looong for an epic fight sequence involving Tatsuya at his best. Granted, he wasn’t at his best, but he still actually used his gun to shoot someone, and more than ONCE.

Plus there was loads of cool swords action from Kirihara, the Magic Kendo Club Capt. I seriously forgave them just because I prefer the sword action over the guns.

And that brings me to a discussion, an announcement that is about another anime.

On second thought, I’ll just post that as a seperate post so as not to merge these two different anime together.